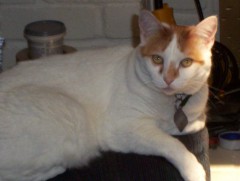 Eggnog, last of the HarpHaven Pride and the Christmas kittens, passed beyond the Veil last night. She left us peacefully, without distress, in her sleep at the age of 20.

When our most senior cat Pixel passed (at the age of 16) during Thanksgiving Weekend 2000, we were concerned that his “little sister” Chiya wouldn’t be long in following. She was mourning, lonely, and suddenly showing her 15 years. So we went to the animal shelter and adopted two female kittens, which the pound said were about four months and littermates. Based on the time of year, we named the tabby Mistletoe for her brilliant green eyes. The one who looked like a Turkish Van, white but for cinnamon ears and tail, we called Eggnog.

Eggnog was Daddy’s Girl from the get-go, although she never slighted me in the love-and-cuddle department. Himself became an instant hit with our vet’s staff from the moment they walked into the exam room to find a big, fuzzy guy waiting with an adorable kitten on each shoulder. And Chiya, once she settled into having two kittens around, perked up and started being her own kittenish self and playing with the youngsters. I am firmly convinced the Christmas Kittens added another five good-quality years to Chiya’s life.

Eggnog, true to her Turkish Van markings, loved water. She’d play in it every chance she got, including joining me in the shower. She loved the water fountain we got several years ago, that ran a steady stream into the water bowl. Her favorite way of getting a drink was to stick her head into the stream and lap at the stream as it ran off her forehead.

When Mistletoe passed at the age of 17, almost exactly three years ago, we wondered how Eggnog would do without her. It turned out she was quite happy as a solo. Her favorite spot became the arm of Himself’s recliner, whether or not he was in it but especially when he was. I think she liked not having to share him, the water fountain, or me in the shower.

I have no doubt that Eggnog’s arrival in the Summerlands was met by Pixel, Chiya, and Mistletoe, and that the HarpHaven Pride is together again. They gave us thirty-five years of continuous laughter and love, and they have earned their sunbeams.