Buying into an established neighborhood in North Texas meant having mature trees around, and one of them graced our front lawn. It was a silver maple, and a handsome example of the species it was. About 40 ft. tall when we moved in twenty-three years ago, with a thick trunk that split into sturdy limbs. A wide, lush canopy of leaves that shimmered silvery green in the breezes of Spring and Summer, and turned bright yellow in the Fall. Shelter and home to assorted birds and squirrels and purveyor of shade over house and yard through the years. I loved that tree.

Silver maples live approximately 35 years in urban settings, so watching it come to the end of its time was not a surprise. Taking it down before it came down on its own, probably into the bedroom, was not going to be a DIY situation. So we took bids and decided to go with Barksdale Tree Service based on a competitive price, competent approach, and the impression we got that he was respectful of safety and property concerns. 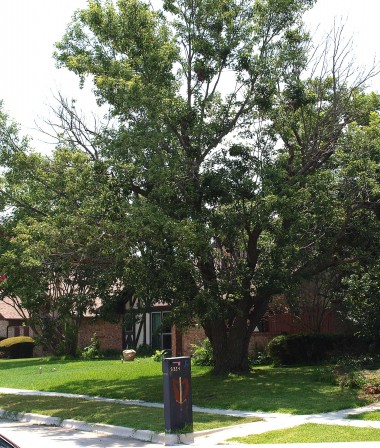 Promptly at 9:00am on the appointed morning, Mr. Barksdale and three other people showed up. And it was clear, from the get-go, these folks knew their stuff. The last time we had the tree trimmed, numerous chainsaws ran constantly to accompany by near-constant shouting. This time, from where I’d taken refuge (in my office), there were fewer chainsaws that ran in bursts of varying lengths, and no raised voices.

Things got quiet around 1:00pm, and we figured they’d taken a lunch break and were taking the opportunity to haul away the first load of our former tree. Himself popped out with his camera and grabbed some in-progress shots. Here’s one.

The crew’s return was announced by the sound of what can only be described as a motorized sanding machine on wheels and steroids. While three of the men loaded their trailer with the rest of our former tree, Mr. Barksdale employed the aforementioned device to turn the stump into a sanded wood bowl, the rim of which was flush with the ground. He then collected the sawdust and tiny woodchips he’d made and filled the depression.

I expected them to haul away the remains. What I didn’t expect was the yard being thoroughly raked and left in pristine condition, as shown below. I fully expect to call these folks in the future for tree service on other parts of the property.

And while we’re both sad to see the silver maple gone, we’re starting to plan on what to do next with the front yard. 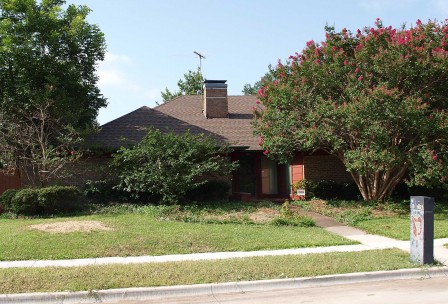